A few years ago, a fellow guide and I both had the day off and decided to go after big brown trout on streamers. It was mid May and the water temp was about 60. It was also a little high and dirty... perfect! I decided to try a new streamer/crayfish pattern I had tied up the night before and within just a few casts we were on fish like CRAZY.... but they weren't trout, they were smallmouth bass... fine with me, I love smallies! Since then, the Copper Craw has become one of my favorite bass flies, especially when the water is under 70 degrees. I fish it on a 200 grain sinking line right on the bottom with short, crayfish like twitches. Try it out, it's a simple tie and the bass really go after it. 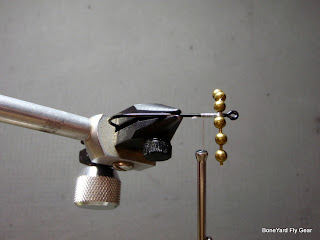 Step 1: Start with a Daiichi 2461 Size 1 hook clamped in your vise as shown. Using white GSP 100 thread, lash in 4 to 6 bead chain eyes on the top of the hook. I nearly always use 6, but they are easy to trim off in the field if it's too much weight. (By clamping the hook as shown you will be able to put more pressure on the thread without bending the hook). 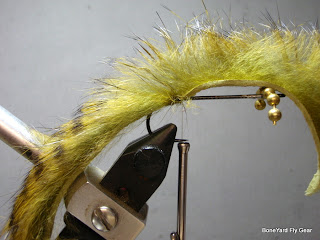 Step 2: Advance thread to the rear of the hook and tie in a barred 1/8" rabbit strip as shown. Olive/black is shown, but white/olive works great as well. 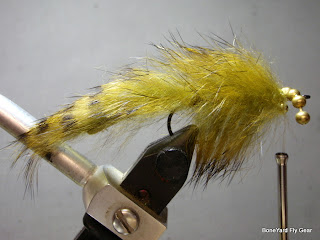 Step 3: Advance thread to front of hook, just behind the bead chain. Wind the rabbit strip forward and tie off. Trim the tail off so it extends approx. 1-1/2" beyond the hook bend. 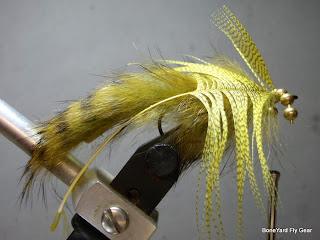 Step 4: Prepare a large yellow or white mallard flank by stripping the rear feathers off and tie in by the tip just behind the bead chain. 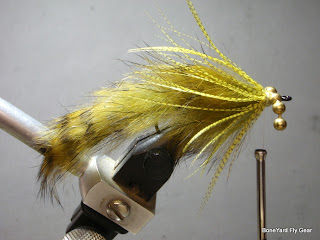 Step 5: Wind the mallard flank collar around 3-4 times and tie off. Step 6: Tie in a generous amount of copper flashabou just behind the bead chain, matching the length of the tail. 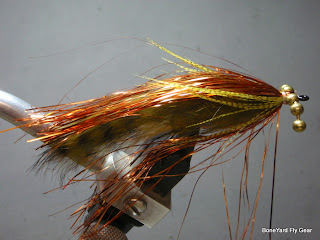 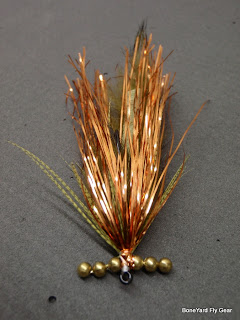 Top view of the finished fly.

As I sit at my vise this morning, it is early May and it is raining super hard... this gets me excited for big brown trout on big streamers! Anytime the water level is going up and getting dirty is a great time to throw some meat at our beloved predators, the brown trout. Over the past several years, the pattern below has become one of my favorite streamers for trout. I have also used it successfully for steelhead and bass when tied in other colors. As with most of my patterns, it's a simple and quick tie. 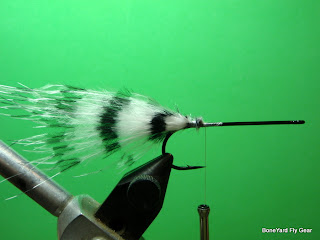 Step 1: Start with a Daiichi 2461 hook, size 1. I prefer white thread (uni 6/0 works well). Tie in some fibers from a white and black jailhouse marabou feather for the tail. 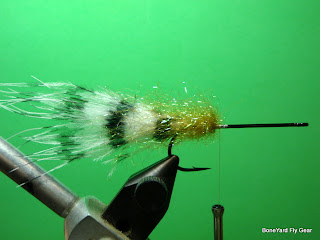 Step 2: Tie in a clump of Olive Ice Dub and advance the thread forward a bit. 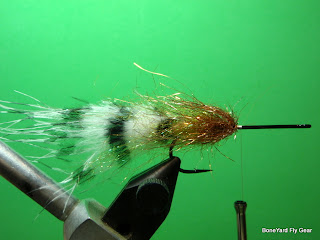 Step 3: Tie in a clump of Copper Ice Dub and again advance the thread forward. 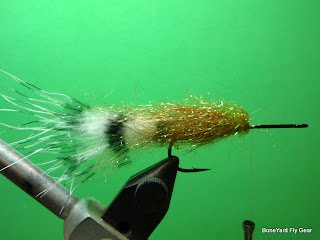 Step 4: Tie in another clump of Olive Ice Dub 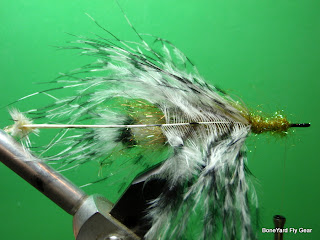 Step 5: Prepare a Jailhouse Marabou feather by stripping off the bottom half as shown. Tie in the feather by the tip in front of your last Ice Dub clump. Dub some Olive Ice Dub onto the thread and wrap almost to the front of the hook. 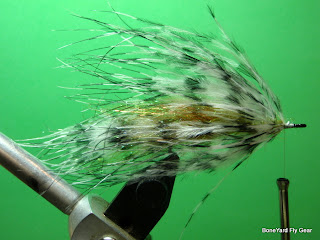 Step 6: Palmer the marabou feather forward through the Ice Dub. It helps to moisten the feathers. 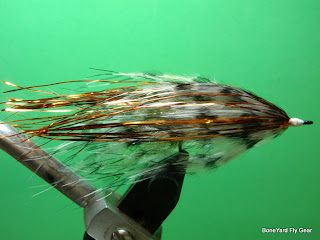 Step 7: Tie in a generous amount of copper flashabou on the top of the fly and finish. 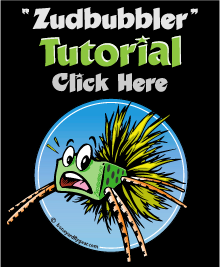